As part of a wider exhibition at Salisbury Arts Centre, LUA  participated with a colour hunt and  asked for cintributors to join in  photographing the shades of Salisbury sky from Noon. Here’s what we received:

Salisbury Cathedral through the eyes of Colin Phillimore:

Still.
The ancient spire
Will soon be filled
With splendid chords
From string, wind and brass,
Joining the melodies
Of the past.
Art
Ancient and
Modern
Resplendent. 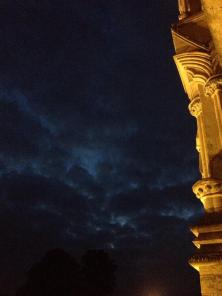 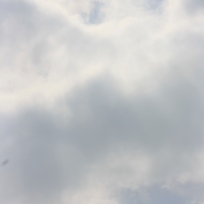 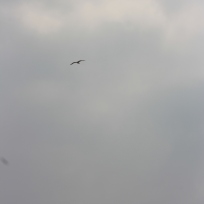 Some words  from Gini:

24hour Salisbury,
I’m watching the weather and have fingers crossed for some good sky today for LinkUpArts’ 24hours of sky. Yesterday would not have offered much more than acres of off-white cloud and even a patch of inaccessible sky when the downpour was too intense to be out in.

I’ve been looking at Salisbury with new eyes in the run up to 24hour. I normally just go for the big picture, getting safely from a to b without too much hassle!
I’ve been spending time with the lime trees in the Guildhall Square in preparation for a Kingfisher project that is timed to culminate in the 24 hours. After much public protest the existing trees in the Market Place and Guilhall Square were retained when the two areas were given a face lift. The two existing spaces used to have quite separate character, emphasised by the two rows of lime trees marking out the sides of the Square. The Market Place was a less defined area with an avenue of plane trees along one edge and a single row at right angles to it as a second border edging.

The lime trees separating the two spaces were the most endangered. It is mainly these that feature in the Kingfisher project. The trees are being named, photographed and written about. Not many poets produce work spontaneously, so preparations are already under way. The poets have chosen their trees and begun each unique process of creation.

Twenty four, a day and
a night’s worth of hours
something so ordinary
the taken for granted
repetition of waking
eating, working, sleeping.
Yet each hour unique and
open to be filled with
passion, conviction, quest;
with the words, the deeds, the touch
that will stop your heart from
breaking: your senses from
shattering in the dismay
of realisation, the
aching regret of time
misused, misunderstood.
When you look back, twenty four
hours, days, years from now
will you feel regret, feel
hunger for time ignored?

As part of a wider exhibition at Salisbury Arts Centre, LUA plans to participate with a colour hunt. You are invited to join us in photographing the shades of Salisbury sky from Noon to Noon on 30-31 May.

Salisbury Arts Centre will be capturing a visual representation of the city over 24 hours and are asking everyone to share their favourite time of day or night in a creative/written form. Check out the Arts Centre’s website for further details about how to get involved in the wider exhibition.

Please send your images to admin@linkuparts.org.uk by Noon on 31 May, or as soon as possible after that. Thank you!

Check out our blog from 31 May to see the fruits of our labour! We’ll also be adding  the photos to our Exhibitions page  once all the entries are in, and they will also feature on Salisbury Arts Centre’s Tumblr feed – please ceck back for details!